Ditra is a type of mat that is mainly used when tiling on surfaces that cannot bear movement, deflection, or moisture. These surfaces, when exposed to these conditions after tiling, result in cracked tiles. MDF, OSB, and plywood are some of the best examples of such surfaces. To maintain the integrity of tiles after installation, the Ditra mat helps to avoid cracked tiles. The procedure for tiling over the Ditra mat is different from tiling on other surfaces. The main difference lies in mixing and spreading the thin-set over the Ditra surface.

Walking on Ditra before Tiling

In general, Ditra protects against excessive movement and deflects any weight applied to the surface. It can neutralize the weight deflection because of its structure, eliminating the chances of tiles cracking. Ditra also provides waterproofing, vapor management, and load distribution.

When installing ceramic and other stone tiles, Ditra is beneficial to use. It aids in a durable tile installation that will last for a long time. It is also widely used to tile over MDF, OSB, and other surfaces. In today’s world, construction is becoming light-weighted, and the tiles we use in our houses are very challenging to maintain. The risk of tile cracking always exists because of the extra humidity, moisture, and load distribution they undergo. To help maintain the integrity of the tiles, use Ditra to ensure the tile’s durability and maintenance.

How to install Ditra, step by step

The installation of Ditra is not as simple as it looks. As such, Ditra installation requires some patience, practice.

Use this step by step approach:

● Step 1: Clean and measure the area

First, clean the surface where you are planning to install Ditra of any dust or debris. Next, measure the length and width of the surface and cut the Ditra accordingly. If there are any pillars inside the room, lay the Ditra on the floor and cut it according to the surface requirements. Try to cut some extra and cut as straight as possible. Also, it is much easier to cut the Ditra from the back.

● Step 2: Spread the Ditra on the surface

● Step 3: Spread the Ditra-set over the surface

● Step 4: Lay the Ditra mat over the Ditra-set

Finally, it is time to lay the Ditra mat over the Ditra-set. Try to keep the pieces of Ditra from overlapping to avoid any height difference. Then, apply some pressure on the Ditra to maintain the firm grip between the Ditra and Ditra-set. For this, you can use a grout float to ensure complete contact between the mortar and Ditra. Always start from the center and move towards the sides, pressing the wrinkles outward.

After laying the Ditra over the surface, again mix the Ditra-set following the above procedure. After mixing, spread the Ditra-set over the Ditra and, using a trowel, fill the Ditra cavities. Carefully spread the mortar evenly and avoid lumps. Now your surface is ready for tiling.

Ditra Mat Tiling, what is the best way?

First, mix the unmodified thin-set and spread it over the Ditra mat. Use the flat end of a trowel to fill the gaps or the cavities on the Ditra mat. Use a notched trowel to make even rows of thin-set on the Ditra mat. It would be best if you then put the mortar on the back of the tile. This helps the tile on the mat maintain a strong bond between the tiles and the surface. Complete the whole row by following the same procedure and then move to the second row.

Ditra is mainly used for tiling on surfaces like MDF, OSB, and Plywood. Essentially surfaces that have difficulty holding the tiles properly. These surfaces offer opportunities for movement and deflection when pressure is applied to them. Because of these bends, cracks in the tiles may result. Placing Ditra over these surfaces for tiling absorbs any stress that may cause cracks in the tiles. If the substrate moves because of the weight, the Ditra prevents the movement from transferring through the tile by flexing with it. This reduces the risk of tile cracking.

After installing the Ditra mat, you can tile the surface right away, or you can wait. Tile installation on the Ditra is the same as tiling on any other surface. The only difference comes from spreading the thin-set.

● Step 1: Cover the area of Ditra evenly with a thin-set

After spreading the thin-set, use the flat side of a trowel to fill the square gaps over the Ditra surface to the top. Then spread more thin-set over the surface and make even rows with the notched edge of a trowel. When tiling the Ditra surface keep in mind to put the adhesive on the backside of the tile as well. The reason is that it will keep the strong bond between the tile and Ditra surface. Apply the thin-set at the backside of the tiles using the flat trowel edge up to 1/8” thick. Then place the tiles one by one onto the rows you made with a notched trowel edge.

Complete the whole row and cut the tiles where necessary using the tile cutter. Start tiling the Ditra surface from the center and then move towards the sides. You can also tape the joints of the tiles with the painter’s tape to hold the tiles. Put plastic spacers between the tiles to maintain even grout lines. While doing this, make sure that the tile joints are in line with each other.

The thin-set used on the Ditra surface takes almost 24 hours to dry. After tiling, ensure that no pressure or weight is applied to the tiles for the next 24 hours. After 24 hours, remove the painter’s tape and plastic spacers and mix the grout according to the instructions if it is not premixed. Apply this grout between the tiles and let it dry, then clean the tiles with a sponge.

Tiling On Ditra Matting, what thin-set to use?

In general, use a non-modified thin-set for effective results. After matting the surface with Ditra, you can start to lay ceramic or stone tiles over the Ditra matting. The unmodified thin-set helps to maintain a strong bond between the tiles and Ditra matting, even with a higher moisture level.

Since Ditra allows the adhesive to be properly moisturized, the mortar can become completely hydrated. This maintains the unbroken bond and firm grip between the tiles and the Ditra surface.

The modified mortar needs the surface to be completely dry when setting the tiles over the Ditra. When used between the Ditra and stone tiles, this adhesive can take more than two weeks to dry. Because of this, I recommend you use unmodified mortar when tiling on the Ditra surface. You can mix the mortar and spread it over the Ditra matting with the trowel’s flat side to cover the holes on the Ditra mat. Then, place the tiles on the adhesive starting from the center. Maintain equal distance between the tiles using plastic spacers and then apply grout between the spacing.

Tiling over Ditra Heat, what should I pay attention to?

In general, before matting the surface with Ditra, seal the edges of the surface and then spread the Ditra mat over it. Put the heating cables between the studs and cover them with underlayment. When tiling over the Ditra heat, make the thin-set by mixing more water than usual to allow the tiles to stick to the surface properly. Also, pour some water on the surface to make it a little wet before placing the tiles over it.

The Ditra heat system is mainly used with stone tiles because of their heat conductivity. This ensures the transfer of energy from the heating cable to the surface.

Through this article, you have learned if you can walk on the Ditra mat before tiling it. Since Ditra protects the tiles from any unnecessary movement, deflection, or moisture on the surface, walking over it before tiling or even after installing it for tiling will cause no harm to the mat.

Ditra is used as an underlayment for tiling on surfaces like MDF or plywood. Throughout this article, you have also learned how to tile on the Ditra mat. Additionally, you have learned how to mix and spread the thin-set over the Ditra surface for effective tiling. 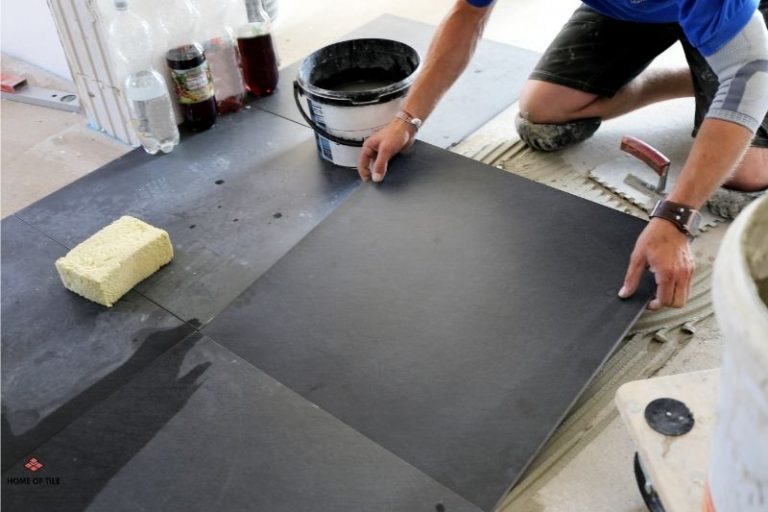 Everyone wants to give their tiles a more aesthetic look. The starting point of your project plays a very important role in this. Before tiling any surface, you must establish a complete layout. This way, you know… It is important to prepare a surface in the best way possible before tiling. There are several ways to prepare a bumpy or uneven surface for tiling, the most common way is by using a self-leveling compound…. If you are thinking of adding new tiles to your house, tile spacers play a significant role. Tile spacers are essentially plastic objects that come in a variety of shapes and sizes. When tiling your place, maintaining… Grouting is a normal part of the tiling process that is done to achieve a nice finish and fill the narrow gaps between the tiles. It is the last and one of the most important steps in… Laying tiles on any surface is something that most people can learn. But for a good result, you need to prepare the surface correctly. If there are bumps or dips on the surface, it can cause cracks… A backsplash is not only something practical. Creative designs can help make your kitchen look beautiful. Backsplashes provide a creative and exciting opportunity that can result in a wall space that makes your kitchen functional as well…